At the Top of the Temple

Home/General/At the Top of the Temple
Previous Next

At the Top of the Temple

A social media refusenik, I negotiated my publisher down from Twitter (pure evil) to Instagram (a devil I didn’t much know). As fun as its been to reconnect with old or absent friends, I still find social media a depressing proxy for the type of relationships I truly enjoy (i.e., actual meatspace, face-to-face, human-on-human interaction). The numbness our media induce was another fixation of Marshall “Medium is the Message” McLuhan’s. In a less celebrated but equally insightful essay, McLuhan traces the etymological root of Narcissus to “narcosis,” not – per the more common moral lesson ascribed to that myth – vanity. McLuhan’s thesis is that media, as pseudo-prostheses, numb the very sense or appendage they extend. (A thesis certified by recent studies of neuroplasticity, by which our brains conceive of tools as replacements of, and extensions of, our bodies. E.g., holding the hammer supplants the hand.)

Anyhow, reluctantly reconsidering my social media reflection put me in mind of my first trip to Central America in 2012. The following is adapted from an academic essay (adapted in the sense that I smoothed out some of the jargon, and refined content oriented toward class readings). I plan to do the same with other scholarly selections, but if you like, you can find the same piece, alongside others, in its unadulterated version on my Academia page. 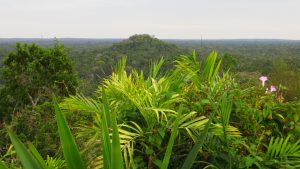 I recently spent two-and-a half months traveling through Central America (Guatemala, Costa Rica, and Belize) with no internet-capable devices on my person. I had a cell phone, but it was not “smart” (or, as it turned out, much use as a phone. To the extent that I ever sought out a signal, no signal was ever acquired). I took neither computer nor tablet (though – a music junkie – I was never without my antiquated click-wheel iPod.) (Speaking of that early-gen click-wheel iPod, my cousin’s eldest son, at twelve years old, had no idea how it worked, and uselessly swiped at the screen with building frustration.) While camera shopping, I had been keen on a wireless-internet model that would theoretically have let me whisk photographs to friends and family over the ether, but settled instead on an old-fashioned (digital) Canon, one of those bulky beasts that takes up the entire palm of your hand and necessitates the promiscuous plugging of material cables into foreign computer terminal outlets. I admit I take a certain degree of pride in decoupling myself from the omnipresent grid. There I was, courageously shedding myself of constrictive contemporary plumage, to traipse naked and unencumbered into one of the few remaining, rapidly evaporating, corners of Eden; a prelapsarian fever-dream of (quasi-)electronic emancipation. The contrarian in me was rhapsodic: I revelled in being so courageous, so enlightened, to dispense with the Internet. Unshackled from its yoke, I turned from the flickering light and fled the cave, adjusting my vision to sweet, unseasoned light.

What did I find upon entering the jungle? And, to be clear, I don’t mean “jungle” figuratively, as if to portray Guatemala as some primal paradise. I was quite literally in the jungle, volunteering for a wildlife rescue organization that methodically weaned its charges off of the drug that is humanity. Not to press the point, but my first night there, we found a scorpion in the dorm, I met the resident shower spider (a charred, clutched fist), and at around three a.m., was treated to an ear-splitting chorus of howler monkeys whose astonishing grunts, bleats, and screams can be heard upwards of ten kilometres away. (This troop were in the trees immediately outside.) What did I find upon entering the jungle but a wireless Internet connection! One of my early friends, a young American woman, offered me free reign over her rickety laptop. I lasted five days and then succumbed. It was near dusk as I surreptitiously wound my way down the rock-lined (so as to dissuade snakes) path to the administrative office for a hit. Gigantic mint-green cicadas – by no means the only insects on call – flung themselves, kamikaze-pilot style, at the impossible white light given off by the screen. The connection was choppy, pages loaded in fits and starts, blocks of colour popped, flickered, shifted, and dilated like living cubist art. When I finally got my Gmail functional, eighty percent of the messages in my inbox were spam. Nonetheless, I felt an immense relief.

What I would find, for the duration of my trip, was that irrespective of the functionality of a given device on my person, I had frequent, if not perpetual, access to the Internet. From the centre, we took biweekly sojourns to Flores, a tourist haven flush with Internet cafés that charged so little they were practically free. I later discovered I need not pay for Internet access at all. Many of the local hostels – lax in discriminating between guests and interlopers – had banks of Internet-equipped computers and Wi-Fi. At any given residence, you would stumble into a sea of scrolling screens. It would shock no one to propose that Facebook is a preeminent organizing principle of Western civilization, but prior to this trip, I hadn’t clocked the extent to which we were exporting this fetish for indefinite interconnectivity and continual, collective distractibility. Maybe “exporting” isn’t the right word, but rather incorporating perpetual interconnectivity into the exoticism of foreign trekking. I was an apostate among missionaries who were out spreading the gospel.

I fled further into the jungle with my neutered phone (now a glorified alarm clock), arcane iPod, and digital camera in tow. I took a guided tour to El Mirador, a sprawling Mayan ruin inaccessible but by foot, horse, and – if you can pay the piper – helicopter. This was the most off-the-beaten-track I have ever been. It takes two days to hike the sixty-five kilometres of mangled mud in order to spend one day on site before hiking back out. On the first night, we set up camp at a rudimentary way-station (replete with scorpion, tarantula, and a flock of wild turkeys), shed our gear, and then scaled the first of what would turn out to be many temples, the Temple of the Monkey. My companions and I basked in the view – a verdant canopy stretching as far as the eye could see – while our guides set about teasing cell phone signals out of the air. 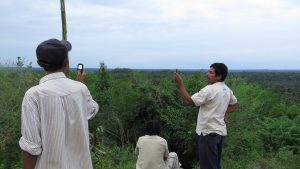 This is not in any way a judgment. These men know this view all too well, and are absent their families five days at a stretch. There are many people strewn across this big wet pebble who must take their opportunities for reception when and where they come. Rather, I was jarred by the juxtaposition of my own glorified shunning of civilization’s baubles, on a sojourn through unfamiliar terrain to encounter the exotic(ized) relics of a relatively distant past, only to turn and find the curators of that past with their hands held high, reaching solicitously for the fruits of the present. I was reminded of a friend of mine from Pakistan who is puzzled by my penchant for camping. Her ideal vacation is to plunge headlong into the most urbanized, cosmopolitan, billboard-saturated, light-festooned cityscape available. For many members of her extended family, what I consider “camping” — rustic, bare-bones, back to the earth — is everyday life.

Do we only ever seek to escape life as we are accustomed to it?

The neuroscientists have long-since rung the physiological alarm bell. Our devices – or, rather, the bells and beeps and whistles and tones and jingles that our devices incessantly emit – elicit squirts of dopamine from the hippocampus, the pleasure-centre of the brain. Our cortical disco. With so many machines, so many portals and avenues of contact, the infinite messages sent and received, the endless alerts of dissemination and arrival, we have effectively been rendered dopamine junkies, so many dogs shackled to Pavlovian leashes.

I admit that my trip was not merely an indulgent (in and of being temporary) flight from modernity, but was also driven by a desire to stay on top of my drugs, a category that should encompass not only the legal (pharmaceuticals, alcohol) and criminal (heroin, cocaine), but seemingly benign and everyday opiate-of-the-masses-type narcotics like TV, shopping malls, and fast food. Of the drugs I’ve tried, including cigarettes, I’ve found few addictive. I have, however, found drugs to be habit-forming. Is this a fine distinction? I don’t know. The point is that, as a creature of habit, I’ve always been predisposed to filigree routines and rituals with substances – say, a scotch or a beer at five o’clock – with a consistency that quickly calcifies. In the aftershocks of extreme indulgence, or in moments of self-reflexivity, I might undertake a self-enforced detox or “dry month,” a countermeasure to abuse I borrowed from a friend’s alcoholic father. In essence, this is a kind of sanctuary from craving, at once reflection and removal, a failsafe to ensure that I remain in control of the substance, and not the other way around. Up until this trip, the only drug I’d failed to conquer as such was caffeine, but upon my return I had to add dopamine to the list. It could be argued that this particular drug has an unfair advantage, in that I can’t bodily control its intake, since it is already inside my body. Moreover, intake is induced by the very media that make everything work. What are my options here? Monastic refuge in a mountainside lean-to? In terms of dopamine, I confess I am outgunned. I might lament the devices and their interminable bleats, impose artificial limits to their use, and seek occasional and temporary refuge in the jungle, but I am nonetheless an addict.