Doctor Barker Samuel Stone had no idea where he was.

His first thought – froth struggling to the surface of the tar – was this: Mexico? Had he somehow been delivered south of yet another border?

Whatshisname? Enraptured flautist with the hedgehog spikes? Kinkajou? No, those were the ornery bear rats from Guatemala. Uh…Kilimanjaro?

A bubble broke through, a snippet of text – Authentic Talavera tiles… Burst. Irretrievable.

The camera zoomed out to wider shot as the man pounded his mallet-sized fist on a rostrum. Behind him hung a nondescript navy blue curtain patterned with regal-looking insignia. To his left – a woman, hands folded primly over her pleated russet skirt, mouth clamped in a grim line. Though the TV was muted, the man was clearly shouting, swinging his arms in emphatic arcs, a conductor combatting an unruly orchestra.

The camera closed in, cutting the woman out of frame, fighting to keep purchase as the man bobbed and weaved – the pin against the butterfly.

Cardiac arrest? Am I dying?

The soundless television loomed. An epiphany: I’m on the floor! Let his head loll. Yes. Floor. Legs outstuck, pants bunched below his knees, limp penis sticking out of the slot of his briefs like a dead tongue. Remote control in one hand, ball of toilet paper in the other.

An echo. An unknown voice. Sounds like a party!

On the floor, slumped back against a bed, caped by a duvet with a faux-woven Aztec pattern – girders of rust and tan and turquoise.

—faces. Night. Buildings ablaze. Everyone angry, yelling. Raised arms and pumping fists. Cut to a police cruiser engulfed in fire, objects hurtled – Bricks? Rocks? – at the flaming carapace. Plastic bags wind-whipped through the frame. Cut to a high angle, helicopter hovering over the cauldron of chaos. Spotlight tracking haphazardly scuttling figures, arms laden with spoils. Barker struggled for coherence. What was this? Protest or plunder?

Have to get up. Hospital.

Thumbed the remote to turn the television off, unmuted it instead, flooding the room with a concert of disorder: chanting, burning, shattering, sirens. Instinctually flung his arms in front of his face, sending the remote pinwheeling into the wall. Heard the cover spin off with a crack, the batteries clatter across the tiles like tossed dice.

The blare abruptly broke off, supplanted by the soothing, singsong timbre of a male news anchor – face thick with foundation, hands firm against his desk. The speakers crackled as he spoke.

Barker resolved to stand, to lift himself out of oblivion.

Who was she? What party?

Hands on the floor. To his left, cool (Talavera!) tile, to his right, a patch of lumpy muck. Lifted the sodden hand, dripping yolky slime, sensed another bubble straining to the fore. Pushed it back down.

The thumping morphed, no longer seemed to emanate from within…

Wiped his hand on the duvet, reached up under his shirt and pressed it flat against his chest. His heartbeat, steady as a metronome.

Was someone saying his—?

Propped himself on his knees, grabbed an edge and pulled. A decorative plate rose before him like the sun at dawn: The hunched deity, the flautist mid-leap, in the throes of—

Kokopelli! More text materialized in his mind. This revered god of fertility—

His still-slick-with-slime hand slipped. Landed hard on his coccyx, grunted with pain – first Gah!, then Fuh! – rocked side to side like an upended tortoise.

Stomach lurched. Before he could stop it, the tide crested.

Vomited onto the floor. Again. Again.

The thump resolved into more of a…pounding?

“Doctor Stone! Are you all right?” Pound pound pound!

A man’s voice. Did he know him?

From the television: “Joining me now is Professor—”

“—a Civil Rights historian who teaches law at—”

“Professor, thank you for joining us this evening.”

Using the bed for support, Barker lifted himself to standing. A mirror on the wall, punched tin frame with scalloped edges, revealed him to himself: hair pressed into oblique peaks, eyes red and sunken, skin pallid, shirt sodden with yellow.

Tugged up his pants and shimmied for the door. Even these mincing steps made his stomach churn. Clenched his jaw and pursed his lips. Hold it back. Push it down, down, down, down…

Had more or less wrested his pants up to his waist when a full foam broke through: The Fiesta Room! The keynote! The woman at the—

TV: “What we’re watching unfold here is the unfortunate, but in many ways inevitable outcome of years, decades, of institutionalized discrimination and disenfranchisement…”

Took a step back.

“…the overarching goal of which is and always has been to abridge, under one guise or another, the freedoms of a particular set of people grouped per their racial heritage…”

When had he come back to his room? What had he been doing on the floor? Who was this asshole pounding on his—?

A blunt THUD. A tremor. Force meets immovable object. The door shuddered. Barker rolled back on the balls of his feet. A second THUD, this one accompanied by splintering. The door distended; a puff of dust clouded the air like cold breath.

Barker held out his hand as if to dissuade an attacker, watched as the door caved, split down the middle in a confusion of powder and plywood shards. One half of the sundered door swung dazedly on its hinges, the other toppled at an awkward, canted angle.

TV: “Excuse me for interrupting, Professor, but it sounds like what you’re saying is that these people have no choice in terms of their own actions…that these acts of civil disobedience and vandalism—”

Barker froze, one hand suspending his loose pants, the other extended in self-defence. Through the rubble of the shattered door, two men appeared. Police officers. Behind the officers, a man and a woman in identical uniforms. Paramedics? A few feet behind this second duo was a concierge holding a keycard aloft like an Olympic torch, looking crestfallen.

“In many ways they don’t have a choice, so thoroughly have their freedoms – in different ways, over so long a period of time – been systematically stripped from them.”

The taller policeman pushed inside. Barker watched the officer’s eyes scout around the room – first to this, then to that, and back to Barker. The officer’s eyes narrowed, mental gears grinding, knitting every observable element into a firm narrative sheath.

Barker had to say something; stop the officer’s story from crystallizing. While in certain respects, in certain quarters, Barker was considered a genius (of sorts), this was no time for showboating. All he needed was a simple and succinct interjection, a different angle, a unique twist, a contrary but equally plausible counter-plot.

What he came up with was this: It’s not what it looks like.

Okay. Not great. But it would have to do.

As Barker began to speak, the relay between his brain and mouth fizzled.

The word hung in the air. Barker gawped, considering how best to correct his error. 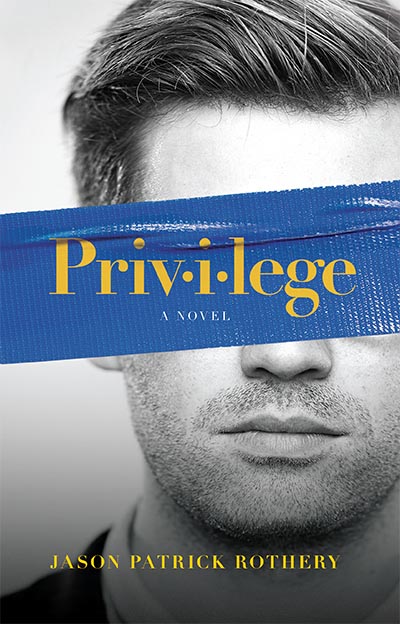